Remember that time the Sox won the series after they hadn't for like 4000 years?  Well this is kinda like that except Moody hasn't had a race that wasn't a mud fest for at least the last two times they've hosted a race but I think we are clear of the curse and today was exquisite.

A dry Moody Park is on par with the Pinnacle; great mix of terrain, decent amount of climbing, full gas, suffer/awesome'fest.

I arrived early to 'put out the vibe' and watch our Novice and Sport riders head out.  Eric and Nate were looking for another 1-2 sweep of Novice Junior and were only kept at bay by a strong slightly older rider.  They came in for 2nd and 3rd.  I didn't get to catch up with some of our other riders, the starts were a bit closer than some of the other races so I was busy with battle prep. 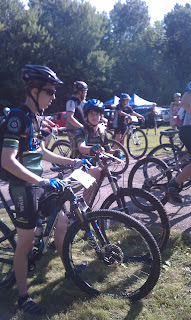 future of the sport

Our SS class ballooned a bit with day-of registrations which was nice.  I was worried it was just going to be the 5 of us, but I think we got up to about 12.  Unfortunately some of the guys rolling in were of the 'silly fast' ilk.  Like Dejay Birch fast.  Literally.  And he was escorted to Claremont by none other than Thom P. AKA BigBikesMedia.  Pete M. showed, Brad B., Taylor C...it was gonna be a good old time.

Everything was nice and civil until around when the gun went off.  Probably the fastest start I've been a part of this season.  Usually I'm right up in the top 1/3 of the field but I was pretty quickly relegated to about 9th or 10th of 12 right out of the gate.  We did our parade lap and got to railing a super fast, super fun descent.  It was me and Mark again, trying to work our way up.  We made a few passes within the first mile or two and were up working on mid-pack.  We caught Brad B. heading into the climb right after the first pass through the Cavity and we were sitting 4-5 behind the silly fast 3 of Dejay, Thom and Pete.

Not long after that we rolled up on Pete on the tail end of fixing a flat.  He was just jumping back on as I came up.  I asked since he was back here if he would mind towing me up to Dejay, he was very cordial and responded with a "Sure, hop on!".  He then promptly dropped me like I was standing still.  I still had Mark in my sights about 10-15ft up and we basically lapped through together.  I was able to keep the gap around there through the descent and the initial techy meandering climbing but as soon as we hit that middle fire road descent section he got away with his slightly bigger gear and that was it.

Luckily about a mile or two later Carl caught me and we got to NEMBA two-man TT'ing for a bit.  We actually stayed together off and on for a bit.  He would get away a tad and then have some bobble or issue and I would catch back on for a tad.  Definitely is nice to ride with teammates when the opportunity arises, but he eventually got away for good en route to a 3rd in Vet I.  The third lap ended up being fairly brutal for some reason.  Maybe it was because I was isolated and got a bit lazy or because the first two laps were such a slug fest but I was definitely cognitive of a pretty significant slowing of my legs and general forward progress.  Cramps were starting to tweak my calves here and there and the heat was not exactly enjoyable.

Unfortunately my lap 3 slow down led to getting caught at the top of the climb before the lap point by a Boloco rider in the SS class.  I believe his name was Andrew L.(?) he was a new face to me in SS, I was able to latch on as he went by and we lapped through together.  He offered to let me come by because "he was not very good in the turns" which was nice because he didn't have to offer that and it was much more enjoyable to take some serious risks trying to get away from him without him in front of me.

I took that descent like a maniac, probably my fastest attempt at that section all day but ultimately it wasn't enough as he creeped back to my wheel after the next climby section.  We yo-yo'd in some of the undulating techy stuff but as soon as we kicked out onto the smoother gradual climb to the Cavity I knew he was going to push it.  He had about 10 more watts than I did...I was able to hang for a bit but I could feel that it wasn't sustainable.  He slowly started opening a gap and I decided to dial it back a bit hoping he would bonk or have an issue in some technical terrain and I was going to save my last few matches for the final climb.

My strategy didn't work out and he ended up besting me by about a minute or so I think...Mark was another minute in front of him.  I don't regret it though, it was the only workable strategy I had at the time.  And even though 6th is kind of one of my old standard placings this field was stacked.  I rode clean and had a blast so I'm plenty happy with the day.  Just think 4-6 years ago I was finishing 15-30mins behind just the local fast-ish guy and now I'm coming in 15mins behind professional SS'ers. 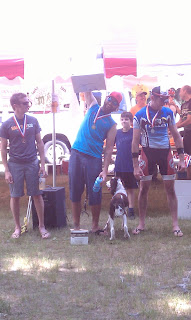 I really hope the word gets out on this course and it returns to what it once was.  It's a great venue and super gnar.  I'll be looking forward to coming back next year after I find those 10W I was missing...
Manifested by Kevin

Links and the What Not